The past decade has been challenging for the people of Puerto Rico. The territory is still recovering from the devastating effects of Hurricane Maria and an ongoing debt crisis continues to wreck the island’s economy. Worst of all, Boricuas have received little help from lawmakers in D.C. or Florida. While of Peruvian descent himself, Carlos cares deeply for the Puerto Rican community and that's why he has used his position to advocate for Boricuas in Central Florida and the people on the island. It was for this advocacy that Carlos was honored with the Felisa Rincón Public Service Award by the Puerto Rican Chamber of Commerce in 2018 and the Fiambrera Award at Puerto Rico Day in the Capitol in 2020! 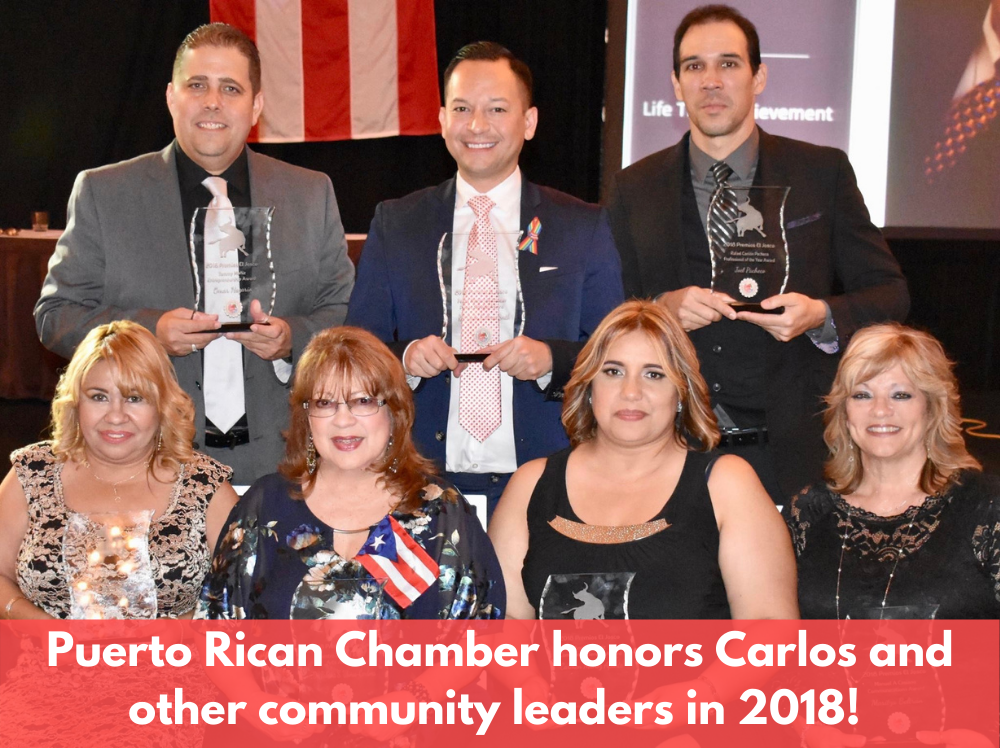 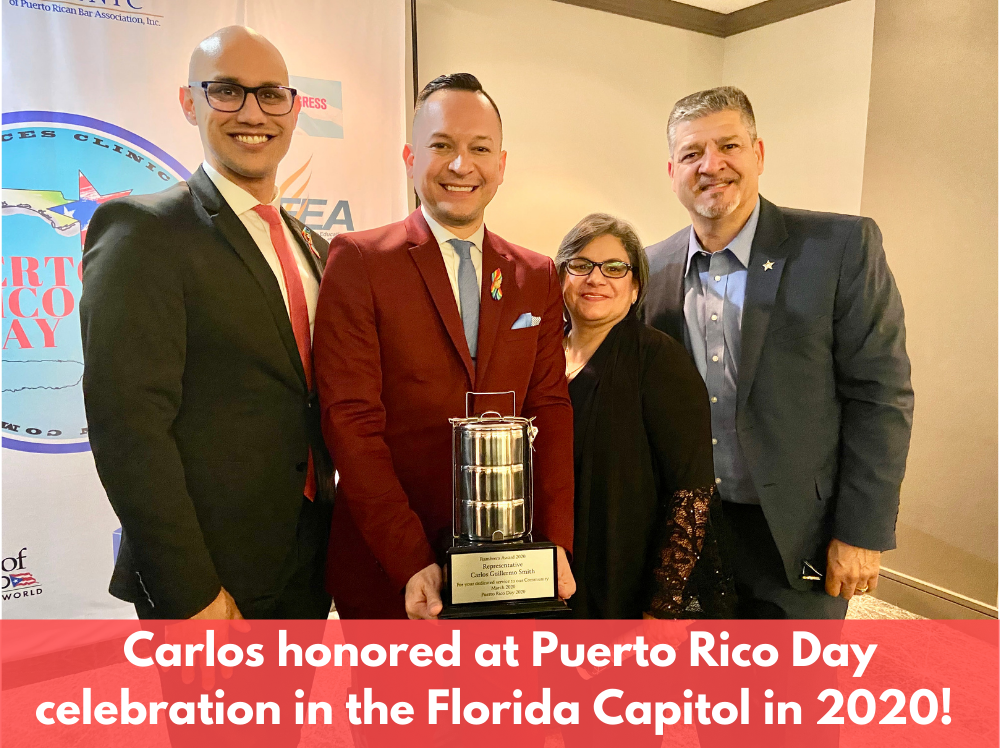 Supporting Puerto Ricans on the island

After Hurricane Maria, thousands of Boricuas poured into Florida seeking better conditions. Faced with this emergency, Carlos helped lead a humanitarian effort to send supplies to the island. Soon after, Carlos travelled to Ponce, PR to help deliver humanitarian aid and tour devastation on he island in an effort to raise awareness for the disaster and increase public support for additional help.  Instead, he worked hard to connect them with disaster relief resources and social services like public schools.

"Rep. Carlos Guillermo Smith, D-Orlando, has recruited volunteers for the effort and launched an event Saturday at noon — Orlando United for Puerto Rico — at the community center. There, survivors of the Pulse nightclub massacre and family members of the dead will come together to help victims of the disaster. Within 24 hours of Smith's announcement on Facebook, the event had been shared 1,700 times and had 240 people signed up to help." Orlando Sentinel, 9/26/17 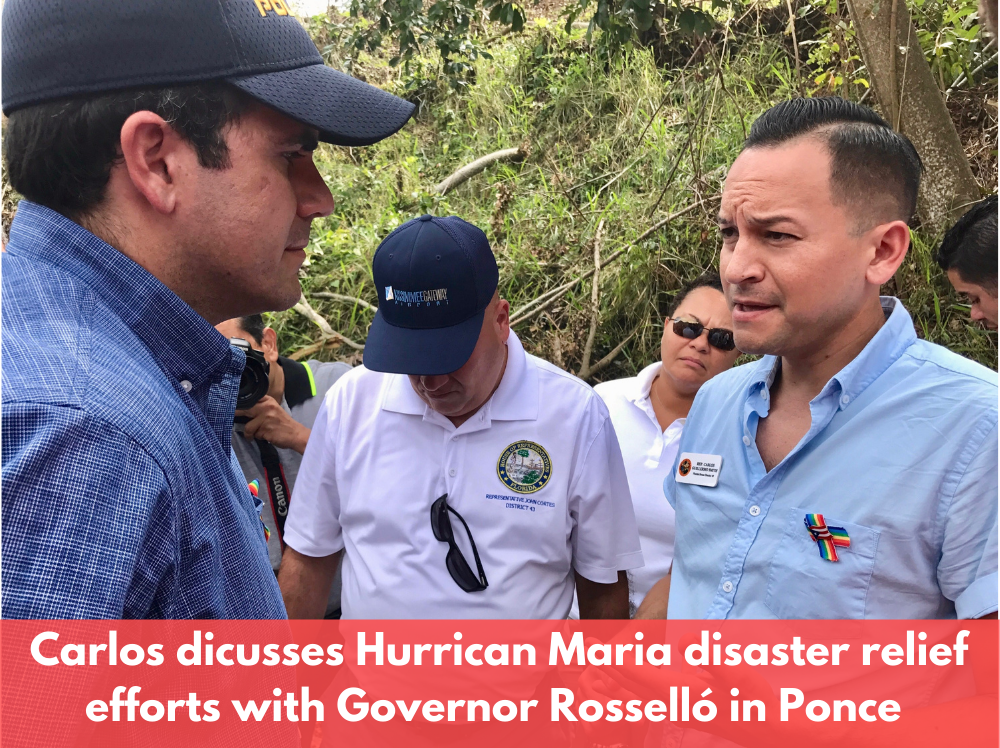 A special moment of solidarity was Carlos’s trip to the island after the devastation of Hurricane Maria. Carlos saw firsthand the challenges the people were facing and was able to share with them the love and support his community back home was sending their way.

With Carlos's in-laws living on the island, he returns often to spend time with family and even one year after Maria, continued to share what he saw to underscore the continuing need for relief. In 2018, CBS reporter David Begnaud even elevated Carlos's observations in an effort to send help to areas still overlooked by the Puerto Rican Government.

Once thousands of Puerto Rican evacuees arrived in Orlando, their number one issue became affordable housing. Florida was already home to some of the country’s worst affordable housing crises before the hurricane, making it hard for evacuees to find permanent places to live. Carlos had already proven himself to be a fierce advocate for affordable housing and used that experience to pressure the state leaders to implement bold housing solutions.

When the legislature finally did return to session, Carlos proposed a bill to endorsed Puerto Rican licenses and certifications. This would have permitted vulnerable evacuees to quickly resume their old jobs here in Florida. Not only would this allow them to begin providing for their families, but it also would have filled key job shortages throughout the state. Another bill would have provided funds for evacuee mental health services.

In the legislature, Carlos proposed and passed HR 8047: a recognition of friendship between Florida and Puerto Rico. This resolution showed the Puerto Rican community that Florida was dedicated to welcoming and assisting its neighbor.

But most commonly, Carlos uses his platform to bring awareness to the problems facing the island and its evacuees. This encourages followers to donate money and supplies to the recovery efforts while generating support for further government action.

But standing with Puerto Rico means more than just showing up and waving a flag. Real allies have to be willing challenge those who represent a threat to the island and its people. That’s exactly what Carlos has done, taking on everyone from President Trump to former Puerto Rican Governor Ricardo Rosselló. Donald Trump has been the most prolific of these attackers as he has been actively hostile towards the Puerto Rican community ever since his botched Hurricane Maria response. Carlos has found this “leadership” unacceptable and uses his position to demand more from the president.

Carlos has even been working to remove Trump by teaming up with the Joe Biden campaign. Biden hopes to show Boricuas that he can help them much better than Trump has. Carlos agrees, which is why he has been a vocal supporter of Biden's in the Puerto Rican community.

While Carlos personally supports statehood for the island, he also understands that this decision can only be made by the people of Puerto Rico. In the meantime, Puerto Ricans deserve a fair shot at success. 60% of the island has access to healthcare through Medicare, Medicaid or Medicare Advantage. Cuts to these programs will have a catastrophic effect on Puerto Rico’s economy.  It's time for Washington to stop holding them back by ending the unequal funding of Medicaid and Medicare to people on the island AND by offering Puerto Rico and its creditors full debt restructuring options available under the United States Bankruptcy Code.